The story of HILGARTNER Natural Stone Company begins on November 22, 1832 with the birth of our founder Ludwig Hilgartner. At the age of nineteen he immigrated to the United States and pursued a career in stone cutting from 1851 until 1863. During this period he developed a business relationship with a stone mason by the name of Gottfried Schimpf, and in 1863 they formed the stone company of Schimpf and Hilgartner. Schimpf and Hilgartner became a successful business and by 1870 had an office at 127 Lexington Street in Baltimore with the main workshop at the southwest corner of Pine and Mulberry Streets in Baltimore. In 1873 Ludwig bought out his partner and continued to prosper. 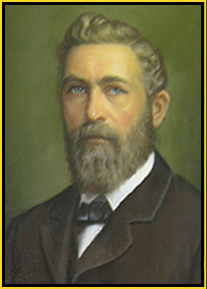 By 1879 Hilgartner, using both imported Italian & fine domestic marbles and machinery powered by a thirty horse engine, was one of the most prominent and well-known finishers of marble in the United States. He had moved the operation, which employed 22 experienced workers, into a two story building at 526 and 528 W. Baltimore Street. By the early 1880’s Ludwig’s two sons Andrew and Charles L., were working within the company. In the German tradition, Ludwig started his sons as apprentices in the finishing shop. By 1885 both Andrew and Charles had earned their place in the family business, and the company was renamed L. Hilgartner and Sons. As time passed and the company continued to expand, it was decided that a new shop with direct rail access was required. The site was selected in 1891 with the shop erected at the foot of Sharp Street having direct access to the B&O Railroad. On January 4, 1902 Ludwig Hilgartner passed away. The company kept the name L. Hilgartner and Sons until 1906. On May 11, 1906, the Hilgartner Marble Company of Baltimore City was incorporated. Our company remained organized under this name for the next forty-eight years, which might be termed “The Golden Years" for Hilgartner. 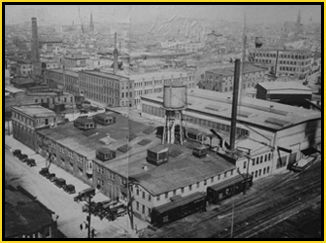 By 1910 a new showroom had been opened on 223 North Charles Street, one of the Baltimore’s most prestigious shopping thoroughfares. The modest shop at Sharp Street had grown in size to cover an entire city block, and the company supplied marble for all types of buildings under construction throughout the United States and Cuba. A branch office had been opened in Chicago, Ill. and a purchasing agency had been acquired in Carrara, Italy. Charles L. Hilgartner had two sons, Charles E. and
Andrew H. Hilgartner. As continued success found clients throughout the United States, expansion again became necessary. This time the company decided to locate the new branch in Los Angeles, California. The new expansion was opened as a separate company called Hilgartner Marble Company of Los Angeles.

Charles L. Hilgartner was president of the new company with his son Charles E. being vice president, and Louis H. Dapprich being second vice president and general manager. Mr. Dapprich, who joined the company in 1905, had learned the marble business in Baltimore. He was also Hilgartner’s Chicago representative for several years. The Los Angeles plant covered an eleven acre plot of land on the outskirts of the city, was equipped with the most modern machinery, and had exceptional access to rail facilities. During the depression of 1929 the demand for marble products plummeted, and the company suffered along with the rest of our Nation. During World War II half of the Baltimore plant was leased, and the plant in Los Angeles supported both operations. On August 14, 1946 Andrew H. Hilgartner, Sr. passed away. His widow and Louis Dapprich decided to close the Los Angeles plant in favor of the Baltimore operation. For this purpose, Mr. Dapprich moved to Baltimore to manage an operation which by that time had outdated, inefficient machinery and was suffering severely from the results of both the depression and the war. 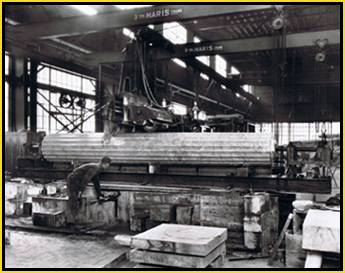 On December 16, 1964 the Hilgartner Marble and Granite Company was incorporated and relocated to a new, smaller shop across the street from the old shop. The new facility was equipped with a state of the art saw and other machinery which gave promise of financial recovery. At the same time Hilgartner became involved in the new epoxies for repair and prefabrication. Use of these epoxies made it possible to strengthen stones, and to use formerly unsuitable stones for more delicate work. In addition to these innovations, Hilgartner stopped producing most monumental work. On October 23, 1958 Louis Dapprich passed away, and Andrew H. Hilgartner, Jr. took over the family business. In 1971, seeing little potential for new business, Andrew announced plans to close the company. Upon hearing this, Mr. John Hardtke, Jr., who was hired in 1952 to re-institute drafting and design as company services, began looking for an investor. The company was soon purchased by the Rosenstein family.

The company name was again changed, this time to HILGARTNER Natural Stone Company, Inc. In 1972 a new engraving process for marble finishing called DIMENSION IV was patented by Hilgartner. In 1975 the State of Maryland required the property on Sharp Street, and we moved to our location at 101 West Cross Street. In 1976 HILGARTNER revitalized the tradition of the Baltimore door brick; and in 1981 copyrighted the MARMOR coating, a process for acid-proofing marble.

By re-emphasizing the only State Accredited Apprentice program in the nation, HILGARTNER focused their efforts both in capability and sales on those projects requiring artisan skills that were no longer being maintained or developed elsewhere.

The first decade of the 21st Century has seen HILGARTNER continue to prosper while general construction of new buildings, new homes and new churches has faltered. The unique hand skills and knowledge of traditional techniques of both fabrication and installation, coupled with continued training in restoration products, has put HILGARTNER at the forefront of the fastest growing part of the stone industry: Restoration, Repair and Historic Replication.

In 2014, due to redevelopment in the neighborhood, HILGARTNER relocated from Sharp-Leadenhall after over 150 years as a fixture in the area.  Just a few miles away from West Cross St. and within the same zip code, our current showroom and factory is located at 2220 Severn St in the St. Paul neighborhood of South Baltimore.
‍ 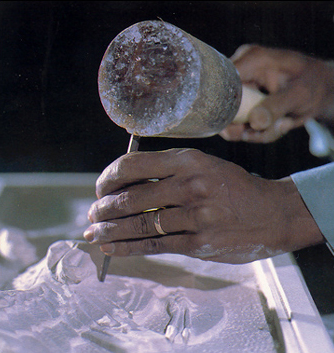 With the only State Accredited Marble Finishing Apprenticeship Program in the United States, we manufacture everything from simple fireplace facings and custom Granite kitchen countertops to ornate custom molded Church altars and statuary. Our 3-year Apprenticeship Program includes not only 4 semesters of related college classes in Mathematics, Computer Science, and Architecture, but also on-the-job training under the tutelage of a Master Stone Finisher. In addition, our Apprentices will be taught the basic principals of stone carving by a Master Stone Carver, shop and jobsite safety training, and will be required to obtain certification in the use of restoration mortars and other contemporary repair materials. When the program is completed, if an object can be fashioned in wood, a HILGARTNER Master Stone Finisher can make it in stone!